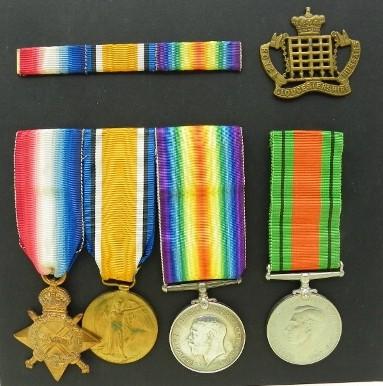 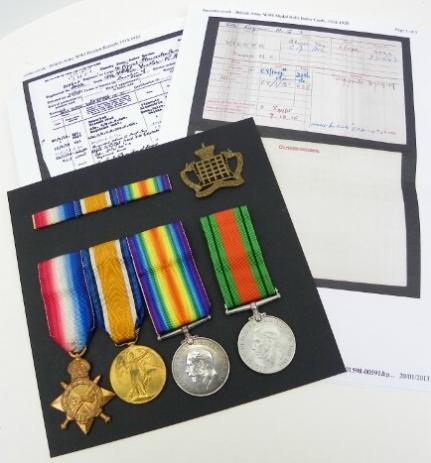 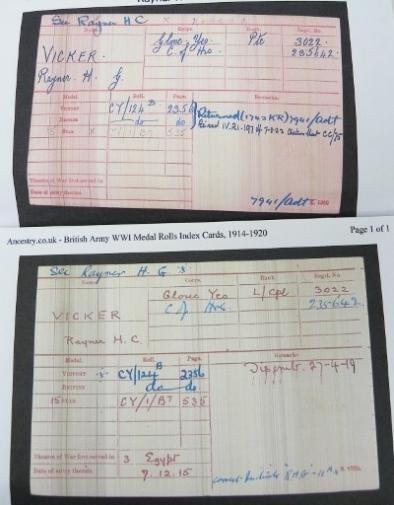 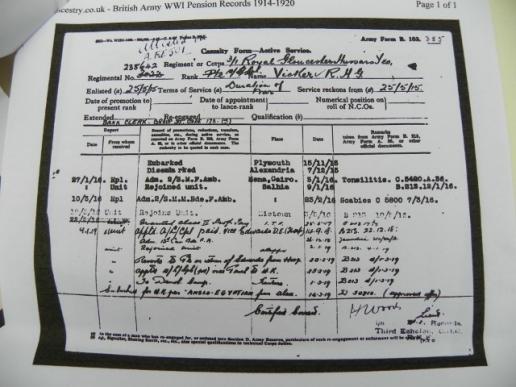 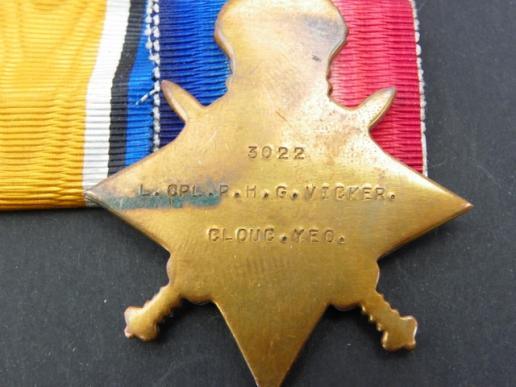 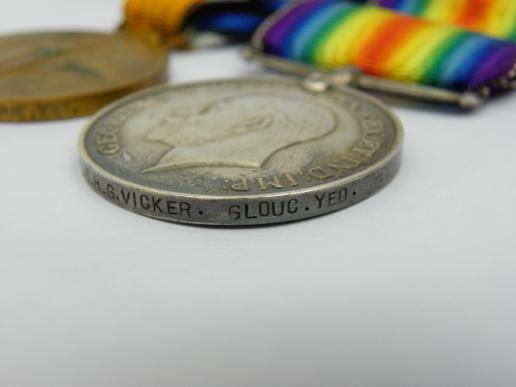 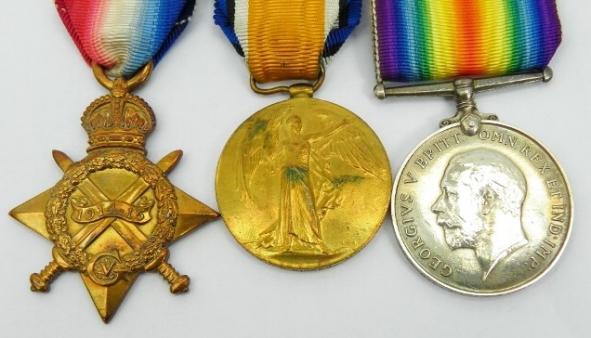 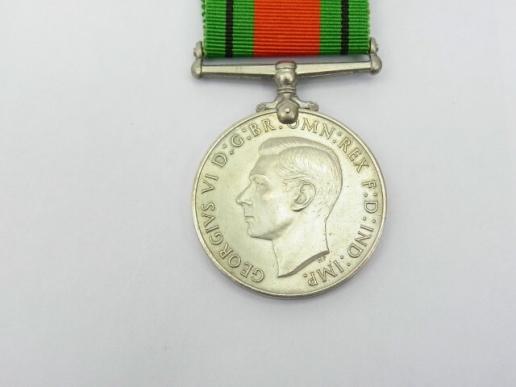 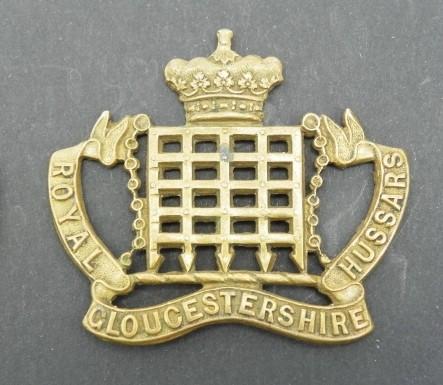 An interesting a scarce 1915 star trio and the WW2 defence medal all awarded to 3022 Lance Corporal Rayner H. G. Vicker of the 1st Royal Gloucestershire Hussars Yeomanry and Home Guard.
The 1914/15 star is correctly named to 3022 L/Cpl. R. H. G. Vicker. Glouc. Yeo. And the British war and victory medal is correctly named as above by to Private R. H. G. Vicker. The ww2 defence medal is un-named as issued.
Rayner Herbert Godwin Vicker was born in 1898 in Gloucester the 3rd son of Ernest a grocer’s manager.
It seems at the age of 16 Rayner enlisted into his local yeomanry, probably only due to his age his miss out Gallipoli and went straight to Egypt landing at Alexandria on the 7th December 1915 only to find most of his old regiment had been killed or wounded at the Green Hill and Chocolate Hill sectors at Gallipoli, his regiment was so depleted it was allied with the 1/1st Warwickshire and 1/1st Worcestershire Yeomanry; they were camped at Mena, near Cairo and restored to a cavalry role, the Regiment strength was now 17 Officers, 316 O.R., and 354 horses and were re-named the 5th Mounted Brigade.
By the end of March 1916 the Regiment was at Romani and on 1st April a report arrived of a 500 strong enemy force at Bir-el-Abd. The regiment now less one squadron and the Worcester Yeomanry were ordered to move to Qatia which lay about 6 miles away. April 2nd they left Qatia and found the enemy had fled, they sent scouting parties out to pin down the position of the Turks but all seemed quiet until April 23rd, the enemy attacked, the Gloucester Hussars commanded by Captain Lloyd-Baker, were only 101 men strong facing a mighty enemy force, with artillery, they attacked and inflicted heavy casualties, the other Squadrons attempted to help but after severe fighting the brigade had to fall back to Romani.
February 1917 the brigade transferred to Imperial Mounted Division where they saw a lot of fighting in the Sinai and Palestine Campaigns, such as the Battle of Rafa, and with the victory’s at Romani and Magdhaba, including the recapture of substantial territory were followed by two defeats at the First and Second battles for Gaza. The 1917 British victory in October at the Third Battle of Gaza was followed by the capture of substantial territory during the Battle of Mughar Ridge in November, quickly followed in December by the capture of Jerusalem.
In the August of 1918 the brigade was retitled the 13th Cavalry Brigade and transferred to 5th Cavalry Division, they remained in North Africa until the end of the war, when what was left of the regiment was returned home to England.
It is amazing how Ratner survived the war, it seems he suffered no more from a bought of Tonsillitis when first arriving in Egypt and Scabies in 1916; the Egypt / Palestine campaigns were rife with disease due to poor sanitation, the lack of supply’s and fresh water must of made the situation almost unbearable, yet thousands of young men from the shires of Britain did their duty, still too few came home.
Rayner Vicker also saw fit to volunteer for home service during the second world war, his service here is unknown, but, I am sure this will all become researchable one day; Rayner Died in 1979 at the age of 81.
All four medals are in excellent condition, there is a few very light contact marks to the medals, so they may have been mounted and worn at some time.