A WW1 British war and victory medal pair correctly named to 4295 Warrant Officer 2nd Class George Dewar 2nd battalion Scots Guards.
The Scots Guards has an amazing gallant history and in no war more so than the first world war. From the onset the Scots Guards distinguished themselves at the battle of Ypres in 1914 and during 1915 suffered very heavy losses during the battle of Festubert ... read more

A total one off made during WW2 for a special forces Corporal John Cooper. It has been made so it fits to a belt and sits in the small of the back. The idea was if he was caught and frisked down, it wouldn’t be found. The knife itself is curved in shape so it is comfortable; it has a good steel blade and two Bakelite type plastic grips. The scabbard is leather and has been hand decorated by coo... read more

A very interesting Khedives Star which has been stamped on the back on the points of the star; 1Bks. 601. C.F. I have done some digging and number 601 in the 1st Berkshire regiment was 601 Private Chas Ford of the 1st Berkshire Regiment. He served in the Second Egyptian War from 1882 and he is also entitled to the Egypt and Sudan medals.
Britain’s strategic interest in Egypt increased af... read more

A 1980’s Nato green camouflage Para smock and same period Para beret. There is a name and number inside the smock which I think reads; 22817060 Reed. The smock is in very good used condition with some signs of wear and the metal zip has lost the little tag on the zipper. The beret has suffered a little, where it has been folded for many years so there is a slightly faded line down the centre of... read more 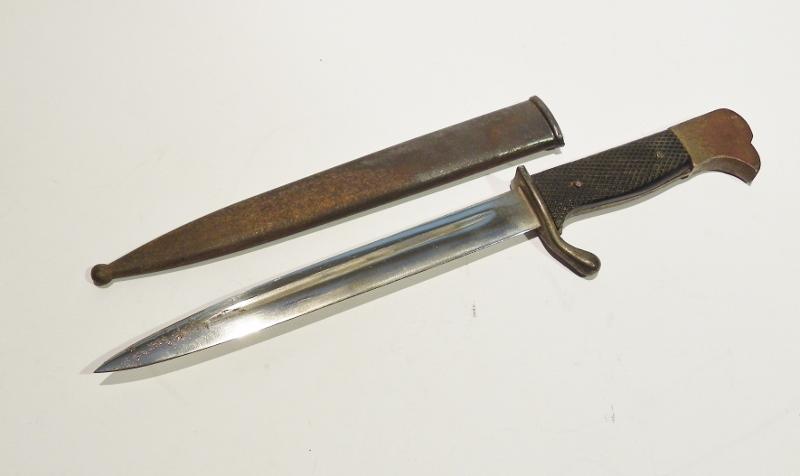 A late 1930’s or wartime miniature German bayonet and scabbard a perfect miniature example of this type of bayonet. It is all metal with black composite grips held in place by two rivets, bird’s head pommel and a single upward swept quillon. It has a good steel blade with a single fuller on each side and a blued steel scabbard. it is in very good condition slight wear and staining to the pommel... read more

An Unusual Pair of Swords????

When I saw these I thought I knew exactly what these were, I thought they were a pair of early 20th century American Parring swords, but when I got them home, I could find another example. They have a two piece grip, that is the gip including pommel etc is cast metal, cast in two halves and originally painted green. It has a solid hard steel down swept guard with hole for a sword knot. Under th... read more

A large Bowie type knife by William Roger of Sheffield. It has an aluminium pommel and a stag horn grip, small brass guard and a long bowie blade with a wide fuller on each side. It is in very good order with a nice clean blade just slight signs of wear. It comes with its original scabbard but this has taken much of the brunt of the wear. It measures 13 inches long.
Shipping to UK mainla... read more

Larger white metal badge worn by the NCO’s of the 17th/21 Lancers. This is a nice old badge but not 17th Lancers pre 1922 as the eyes are not hollow enough and the nose socket is shorter, probably post WW2. A nice example in excellent used condition.
Ref. K15 read more

A stunning heavy solid silver badge worn by the officers of the Royal Regiment of Wales from 1969 on the No1 dress cap. It is stamped silver on the reverse and the crown was gilded, you can just see the remains of the gilding but the all detail and quality is still present.
Ref. K16 read more

This is a really well constructed and very detailed solid brass desk cannon mounted on a wood plinth, there is a plaque on the front which reads ‘Knights of Malta cannon 1530-1798’, as you can see from the photos it comes with its ram rods which are detachable, a fixed bucket of shot and has decorative twisted wire fixings. The condition is very good just needing a clean and it measures just un... read more